Over 2,300 formerly homeless and low-income men and women are housed in our

Our vision of a thriving urban community of hope and opportunity extends to all aspects of our work.  We are committed to restoring a sense of dignity, civility, and respect to a population that has been habitually ignored and forgotten. SRO Housing is the only organization in Los Angeles that provides the full continuum of housing; Emergency, Transitional, and Permanent Supportive Housing (PSH) in private units.  In conjunction with our housing, we provide a wide array of supportive services including food services, case management, information and referrals, transportation, community events, and more.  Our diverse and multi-cultural staff includes formerly homeless individuals, residents, and community members whose history and life experiences are a source of inspiration. With over 37 years of experience, we have a unique insight into the needs of our community and work diligently to anticipate and address those needs with an array of innovative, culturally appropriate and effective services.

SRO Housing Corporation is much more than a housing developer, we are a Community Builder. 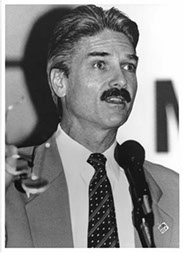 In the late 1970's James M. Wood served as the Chairman of the Community Redevelopment Agency of the

The Central City East (Skid Row) area of downtown Los Angeles, is home to one of the largest populations of transient (homeless) persons in the entire United States. In the late 1970’s, James M. Wood, who served as the Chairman of the Community Redevelopment Agency of the City of Los Angeles, formed a conviction that any plan to revitalize downtown Los Angeles must include the redevelopment of the Central City East (Skid Row) area to address the area’s dire housing conditions. Skid Row, which encompasses approximately 50 blocks within the boundaries of 3rd and 7th Streets, and Main and Alameda Streets, is one of the most impoverished neighborhoods in the Western United States. Skid Row residents, whether homeless or housed, are often poor, elderly, disabled, mentally ill, addicted to drugs/alcohol, chronically ill, and/or unemployed. In 1977, after years of litigation, the City of Los Angeles finally adopted a redevelopment plan for the downtown Los Angeles Central City East area to preserve the single-room-occupancy hotels in the area. In pursuit of that plan, Single Room Occupancy (SRO) Housing Corporation was founded by the Community Redevelopment Agency to acquire and rehabilitate single room occupancy hotels in the area. Since its incorporation in 1984, SRO Housing Corporation has pursued its mission of community revitalization by providing clean, safe and affordable housing, managing public spaces, and administering needed social support services in order to preserve affordable housing.