For over 35 years, SRO Housing has transformed lives in the Skid Row community of downtown Los Angeles. Along the way, tens of thousands of men and women received the keys to new homes. Many had been homeless for years, or even for decades. 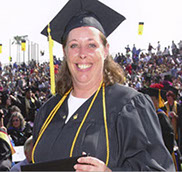 "When I thought of myself as a survivor, it also meant I was a victim ... of drugs, alcohol, domestic violence, homelessness, cancer.  But I am no longer a victim, and I am no longer ashamed. I am not a survivor. I am a conqueror."

Virginia Reed, affectionately known as 'Ginger' by her fellow SRO Housing co-workers, is the Program Manager for SRO Housing Corporation's Permanent Supportive Housing Programs. Her hard-won wisdom and personal insight serve the community where she lives and works.

You can read more of her story. 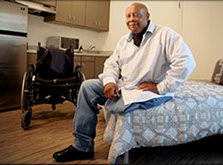 "Living homeless is like a punishment. It is worse than prison."  "At least in prison you have your 'three hots and cot.' You have a roof over your head, food to eat, a place to shower. When I was homeless, I lived with uncleanliness. There were some days, even some weeks that I didn't take a shower. Sleeping with rats, in alleys, in abandoned cars, in abandoned houses, in parks ... I never want to go back to that."

Darrin was homeless from 1986 through 2011. In 1986, he was working for a construction company when he met a woman who introduced him to cocaine, and he was hooked.  He then lost his job and his apartment. Since that time, all those years, he was either in jail, in prison or on the streets, chronically homeless.

"I was doing all sorts of things and it caught up with me. On July 2, 1992 I lost my leg. I got shot in both legs. Then I got a severe infection and I was on antibiotics for months. My parents let me come live with them while I recovered. I was shocked because I didn't even know where they lived."

"The way I had been living was indecent. We had lost touch. They took me in, but even after that something just pulled me back into the streets.  Alcohol and drugs go hand in hand. They were calling to me. I went to the Mission in 2008, but I wasn't ready for recovery. I had a little shack. When I wanted shelter, I just went to sleep there, sleeping with the rats. I noticed that once people come here to Skid Row, they stay here. In 2011, I was ready. I was feeling the cold. I went to the Midnight Mission and I was there for twenty-six months. Sober. I am in recovery now and taking a look at myself and what I have done."

"This is my first apartment ever!" An injury forced Daniel to leave his live-in, care-giving job. "I didn't know what to do." He lived in his car and for a time slept in the stairwell of an apartment building.

A caregiver for over 21 years, Daniel was cared for as a child by six older sisters and an array of aunts. He had never known his mother, who disappeared after his parents' divorce when he was very young. In his twenties, he searched for and found her and established a relationship despite his sisters' disapproval. "My mom had become an alcoholic and had been diagnosed with schizophrenia. She did not take medication. We became friends and I am glad that I got to know her before she passed away."

Daniel struggles with dyslexia, "I went to college but I did not finish. I was tired. I felt stupid. I felt like such a failure." When he lost his job, Daniel tried stealing food to survive, but success eluded him in that as well, "They caught me the first time. I went to jail. I was very ashamed. The worst thing was that my father was disappointed in me."

Then Daniel found his way to Skid Row. "I had never been downtown. I went to the Union Rescue Mission and then to the Russ Hotel. I have always been in care-giving. And when I needed help, SRO Housing saved me."

"All the resources I got at SRO were overwhelming for me. I have goals now: to finish school and to go into social work. I want to get off government assistance and move to another apartment. I want to move on to let someone else experience this beautiful apartment. I want to be a positive influence."

Daniel is an active SRO Housing volunteer at community events, and welcomes visitors to his home as a stop on SRO Housing tours of Skid Row. "SRO Housing gave me an apartment. I am very grateful. I appreciate my home so much."

For over 35 years SRO Housing has been transforming lives from Skid Row in Los Angeles, CA.

Along the way, tens of thousands of men and women received the keys to new homes.

Many had been homeless for years, or even for decades. 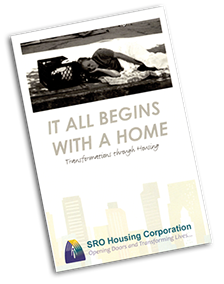